The Story of Pine Hills

The Pine Hills Neighborhood Association, “PHNA,” was formerly called the Pine Hills Civic Club, and was originally known as the Roxboro Civic Club. Incorporated as a non-profit membership corporation in 1960, its members became very active in protecting the community from commercial developers and have successfully kept the community as a residential, single-family oasis in a dense urban environment.

The neighborhood of Pine Hills is located in northeast Atlanta, Georgia, on the eastern boundary of Buckhead and western Brookhaven, crossing both Fulton and DeKalb counties. Specific street boundaries are Buford Highway to the south, Lenox Road to west, East Paces Ferry to the north, and East Roxboro Road to the east.

Who We Are Today

The PHNA maintains its tradition of community, safety and neighborhood preservation. The association serves the community through representation on zoning issues affecting our residential environment; code enforcement assistance; advocacy with other civic groups, such as the Buckhead Council of Neighborhoods, various coalitions, trees, traffic, watershed, etc.; social and community events, including an Annual Yard Sale, Halloween Carnival (via Garden Club) and other neighborhood-wide activities; greenspace/tree initiatives; maintenance and enhancement of our neighborhood entrances.

The Early Days of Pine Hills

NOTE: The following information is the result of an ongoing effort to record the history of the area, as documented by former Pine Hills resident Albert Martin. It’s mostly factual but may include a bit of hearsay thrown in.

After the Creek Indians ceded their claim to the lands in this area, the land was surveyed and split into counties and districts. The Pine Hills area was originally part of Henry County. In 1821 the newly surveyed land lots, each being about 212 1/2 acres, were distributed by lottery.

Around 1885, a corn and wheat mill was built by Major Washington, J. Houston and W. B. Smith on the north fork of Peachtree Creek, about 300 yards from the DeKalb-Fulton line, but inside DeKalb County. It was a water-powered mill. Mr. S. E. Guess, who lived near the site, said he was under the impression that a Kreigshaber converted the two story mill house into a residence. He said it had operated until about 1910. A plat dated 19 July 1929 shows land of Mrs. V. H. Kreigshaber with a building in this area.

The Pine Hills area was a quiet farming community until the early 1900’s when Atlantans began moving out of the city to country estates. One was Roxborough Springs, a big white frame home and hotel of Dr. Powell of Atlanta, on the border line of Fulton and DeKalb Counties. Later the Standard Club, a Jewish Private Club with a golf course was built on this land, now occupied by Lenox Park, a multi-use development. There was also a riding academy in the Canter Road area.

One plat dated August 1936 for North Side Estates Subdivision is for the development of the property of Mrs Dodo White McLarty. This included the land between the Roxboros (note the change in spelling) from Goodwin Road to the north side of what is now Roxboro Drive. The subdivision of Indian Creek Acres was plated along Lenox Road in May 1936. After World War II, more developers began dividing the remaining area of Pine Hills into home lots and many of the homes now here were built.

Relics of the Past

The Guess family lived on the hill to the east of the tennis courts in Shady Valley Park. Only the base of a chimney remains at this site. Their saw mill was located on Peachtree Creek south of the Saratoga Subdivision. Parts of the mill (operating circa 1857-1865) and a chimney from the mill house are still visible along the creek.

The Guess family cemetery, containing at least 30 grave sites, is located behind 1001 Edison Gardens and is mentioned in an 1875 warranty deed. The earliest dated grave site is that of James Monroe Guess who died in1863. 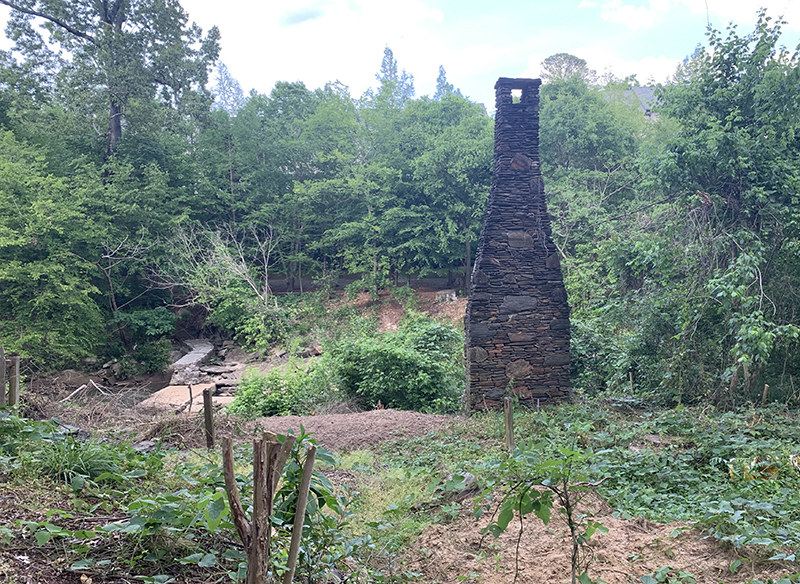